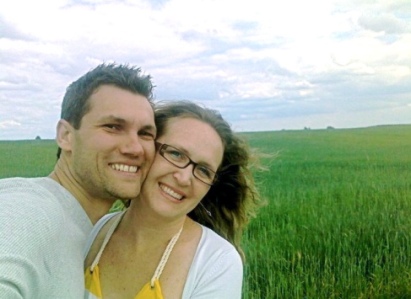 Okay—so, if you, my And 2 Makes Crazy Readers, don’t realize something, it’s that we live in a beautiful but very little farming village in the country of Poland.

Right now, our house is massively undergoing some awesome construction where we are putting in a gate (woot-woot) and some pavers (because cement on wet land does not bode well) and some other cosmetic outside stuff.

WHICH MEANS…our dogs are by and large locked up for long portions of every day.  And it also means I have to take them on long walks.

We have (the field that immediately borders our property) wheat going.  Then there is the other field.  The beautiful field that is for sale by owner—yet no one seems to buy.  So, my dogs and I go and romp around that field (the dogs romp—i walk).  It has tall grass, wildflowers, trees, and is super duper duper big.

It is bordered by wheat on both sides.  And my dogs are always finding random bones.

WELL…how I have missed this fox hole over this last month is beyond me.  But, just a few nights ago, I saw it!

Mind you, it was about 8pm, so my hubby was at home with all of the kids.  I picked up my phone and called my daughter anyway and said, “QUICK!  Hop on your bike and come find me.  Momma found a FOX HOLE!”

Before I knew it, she was riding out to me.  We loved it.  And had lots of fun exploring around it.  Then we decided to call Daddy and Max.  Josephine was already sleeping, “Daddy!  Put Max’s hat on and come out (it was super cold).”

He wasn’t convinced to take a 3-year-old out exploring at 8pm, but he did anyway.

And that’s when it hit me!  Start the music and have my crazy daughter go wild!  I was just SURE she was going to dance like crazy while I literally had a fox hole filming right behind her.

To my great surprise, I turned on the music and started filming and there my daughter went—EVERYWHERE but in front of the camera.  But daddy stayed (even with Maxwell in his arms).  And, apparently, daddy had WAY more fun than I was about to realize.

And now we have the best memory of the night!

A video of my hubby (Richard—the FAR better half of And 2 Makes Crazy) going actual crazy to that really fun (and addicting) song, “What does the fox say?”

Click on the link (I have yet to post it to YouTube) and enjoy!  Especially watch it if you are in need for a smile today!

You can even share this video with others.  Go ahead.  Make their day!

Our church is a small international church that meets at the Sheraton hotel in Poznan, Poland.  It’s called Poznan International Church and was established in 1997. We absolutely love it!  My husband has been the lead pastor there since May of 2002 (the exemption being the year and the half we lived in the States).

On any given Sunday, you will find roughly 16 languages under one roof—all worshipping one God. That’s pretty darn awesome, right?! Right!

This Sunday we didn’t have church in the general meeting room where we normally have service because there was a conference also taking place on the same day. So we met at the restaurant downstairs called Someplace Else. It is a fantastic restaurant with a great atmosphere.The walls display hundreds of signed photographs or musical or sports memorabilia that the General Manager, Marco, has collected for the Sheraton over the years where he has been GM.

On top of that, it is a cozy area where we meet. And, guess what! Children are full-on in the same place where we are. Does that cause some disruptions? You betcha! I feel like half the time I spend reminding little voices to quiet down and little boys to stop climbing equipment. But, overall, there is something beautiful when we all gather together at the restaurant bar for church.

We sit next to each other. We converse in the service together. And, after church, no one is in a hurry to go. And so we share for hours with one another our lives.

It’s a blessing. And you will never leave with a frown. I guarantee it.

Back to Richard’s sermon for today. It was a a beautiful sermon for me to hear. It was on Grace.

Sometimes we hear this word and forget how powerful its meaning is. Richard shared an acronym with church.  Grace stands for:

You know. I think that as Christians we sometimes become too callous to grace. We think, “We have given our lives to you, God, give us grace!” It’s almost as if we demand it. And we shouldn’t. Because grace is a gift. It is undeserved. And it came at a great cost.

Grace—God gives it to us for free. But Grace came at the cost of Christ.

So, I would like to end by simply reminding you… Accept the beautiful gift of God’s favor undeserved through Grace—but never forget to appreciate that it, Grace, is a beautiful gift that came at a great cost.  And then go and live your lives in respect of this fact, glorifying God in all that you do.

Be beautiful examples of God’s grace here on earth.  Be a gift of grace to your family, your friends, your neighbors, your coworkers.  Set the world on fire for the love that God offers us through his son, Jesus Christ!

The God-setting-things-right that we read about has become Jesus-setting-things-right for us. And not only for us, but for everyone who believes in him…God did it for us. Out of sheer generosity he put us in right standing with himself. A pure gift. He got us out of the mess we’re in and restored us to where he always wanted us to be. And he did it by means of Jesus Christ.   Romans 3:22, 23 (The Message)

If you’ve been one of the Crazy followers of this blog, you’d remember that my husband and I started a non-profit foundation in the country of Poland for the homeless and poor.

BUT—what you may not remember is that my husband has been the pastor of an AWESOME International Church for the past 12 years.

Yep…my hottie is a pastor.

Maybe you also remember that we live in a little Polish village.  Our village is about one hour away from where we have church-Poznan.  So, every Sunday, my husband leaves for church at approximately 7:30am.  If you think that I’m getting up, getting kids ready and fed and out the door by 7:30am on Sunday, then you don’t know how much I like my sleep.  Which means—we leave later than daddy.

On this Sunday, I had left in plenty of time and was cruising to church.  The thing you should know about Polish roads—they used to be HORRIBLE!  And then the Euro Cup 2012 came about—and the EU helped fund the fixing of the roads.

But, in the meantime, while the roads were still HORRIBLE, I knew exactly when I could speed (yes, admitting a sin…oops), and where cops sat, and when I could cruise, and when I was home free.

Well, this particular Sunday, I thought I was hitting the “Home Free” part of the road, merely minutes from church when I saw the Lollipop Man!

Let me explain.  In many European countries, the police stand on the streets, while one sits in the car and radars you down.  And, if you have broken the speed limit, the one on the street lollipops you in—literally by waving a little reflective lollipop at your car.  And you, weirdly so, obediently pull your car over and submit your proper documents to the lollipop cop.

So, I got “lollipopped” in and approached by the lollipop cop.

He came with the radar gun to show me I was speeding.  He actually didn’t need the gun because I knew I was speeding.  Again, I thought I was home free (obviously doesn’t make it right, folks :))

And he said to me, “You were speeding.  I need your documents.”

Obediently and submissively, I handed him my documents.  And that’s when he knew!

He hit the jackpot!

No.  Not just a foreigner.  A FEMALE foreigner with KIDS in the back of her car.

And so he went in for the KILL!

I looked at this cop and thought to myself, “Cop, you OBVIOUSLY don’t know whom you are threatening. I am a Middle Child…”  And I prepared myself for battle.

I said, “No.  I know I was speeding.  Please write me my ticket.  I will pay at the appropriate office.”

He was taken aback—A Challenge.

Me, straight-faced, “No, give me my ticket.  I will PAY at the appropriate office!  I legally live here and have paid tickets before.  I KNOW WHAT TO DO!”

Now the cop was getting flustered.  After all, he has just solicited a bribe from a lady that he thought would be a VERY easy target BUT he was getting nowhere.  So, he left me in my car and went back to his partner in crime.  I thought they were cops, right?!

A couple minutes later, he came back to me and said, “You will pay me 100zl.  I will follow you to a Bankomat (ATM)!”

I looked at him.  Really?  Seriously?  Have you not heard me by now?!

At this point, I was actually getting excited.  I had two kids in the back of the car, and he was going to arrest me!  Honestly, I was stoked!  I so wanted to be arrested.  I was going to snap pictures of me and the two kids arrested for speeding in Poland and not paying a bribe.  IT.WAS.AWESOME!

Problem was, the cop was getting smart.  Bummer.

Now HE KNEW he could not arrest me.  What was he going to tell his precinct?  “I arrested this woman for going 10mph over the speed limit and not paying me a bribe…???!!!”  Obviously not.

So, he had to think.  He walked back to his partner.  They chatted again. You could tell his partner was also getting frustrated with my lack-o-bribe paying.

After about 10 minutes, he returned to me with 3 things—my driver’s license, my documents, and a Breathalyzer test.

And this is what he said, “If you pass this test, you are free to go!”

I looked at him and said, “Unless strong coffee is going to reel me in, I’m all for it!”  And I took the test.

He looked at the reading:  0.  I think he was disappointed.  He had NOTHING on me now.  He gave me the test and said, “Pamiątka” (which means Souvenir) and waved me on with his little lollipop.

Poor officer.  Here he thought he hit the “Foreign Lady with 2 Kids Jackpot”—and all he got was a lot of frustration, no bribe, and a bit of humiliation.

I, although I REALLY wanted to get arrested, still walked away with a GREAT story!

So, Mr. Lollipop Cop, thanks for the TWO pamiątki (souvenirs) of that crazy Sunday morning:  My Story and My Breathalyzer Test.

Next time, size up the woman you’re trying to solicit a bribe from before you waste ALL of your time…Because…this American momma don’t play that game!